Senior Status is Not a Disease: How to Care for an Older Pet

Leo, a gorgeous chocolate Labrador, is finally slowing down. As a pup, he was an off-the-walls bundle of long legs and slobbery tongue, and he took only 10 years to “mature.” Relatively lean, especially for a chowhound of a Lab, Leo has always had a decent hourglass figure. But, as he hit the 10-year mark, he seemed to stop enjoying his daily haunts around the farm, and he packed on the pounds.

During Leo’s appointment, our veterinary team discovered two concerning issues. First, we noticed his stiff gait and difficulty rising while in the exam room. During the orthopedic portion of his physical exam, we noticed that he lacked complete range of motion in his hind legs, and appeared uncomfortable when we manipulated those joints. We took X-rays to determine the cause of Leo’s joint pain, and the pictures revealed that moderate osteoarthritis in his hips, knees, and lower spine was causing his discomfort.

Next, we ran a geriatric blood-work panel to check Leo’s organ function. Liver and kidney function are critical when administering long-term pain medication for uncomfortable conditions such as osteoarthritis.

Leo’s complete blood count and chemistry panels were beautiful, for the most part—no elevated white blood cell count, decreased red blood cell count, or increased kidney value in sight. On the other hand, Leo’s liver was a bit unhappy, as his liver enzymes were creeping above normal ranges. His thyroid panel also showed an abnormally low level of thyroid hormones.

A review of Leo’s diagnostic tests showed he had a few issues common in older dogs that could be managed in several ways. His hypothyroidism was causing a decreased metabolism, leading to weight gain despite eating less. The excess weight compounded his osteoarthritis pain by creating more pressure on his joints. As he became more painful, he became less active and gained more weight.

We formulated a plan to break Leo’s vicious cycle of weight gain, pain, and decreased activity that included a prescription diet to combat his mobility and weight issues, pain medication for osteoarthritis, joint supplements to preserve his remaining cartilage, and a thyroid hormone supplement for hypothyroidism. We also recommended low-impact exercise as Leo began to feel more comfortable to help him shed excess weight.

These medications will be life-long, but they are critical to maintaining a good quality of life. Many older pets suffer from metabolic or orthopedic problems, but they can be successfully managed with medications, supplements, diets, and home environment changes.

While we may not have seen Leo as a real patient, we commonly see cases like his in senior pets. Age is not a disease, but many medical issues come with age, including thyroid imbalances, osteoarthritis, organ dysfunction, and cancer. Cats and dogs age more quickly than people, so we strongly recommend biannual exams, at a minimum, to catch issues in their early stages to ensure the best possible outcome. The sooner we discover a disease, the better we can treat it.

Leo took his daily medications like a champ, and was soon running and playing like a pup. His eyes were bright again, and the spunk returned to his step for several more years.

Then, Leo’s family noticed he was becoming stiff again. We repeated X-rays and discovered his osteoarthritis was worsening, despite the diet, supplements, medication, and exercise changes. We formed a new treatment plan, although we did not have many additional options for Leo’s osteoarthritis management, and he continued to decline, despite the best efforts of our team and his family. We now were all working together to keep him comfortable until it was time to let him go.

Since Leo had difficulties posturing to eliminate, his family created a sling that helped support his weight while he urinated, and helped him rise after resting. Their slick hardwood floors provided zero traction for Leo and his unsteady gait, so they placed carpet runners to his favorite areas to ensure he remained part of the family. Steps also were difficult, so Leo’s dad, who was an excellent carpenter, created ramps for his stiff dog. 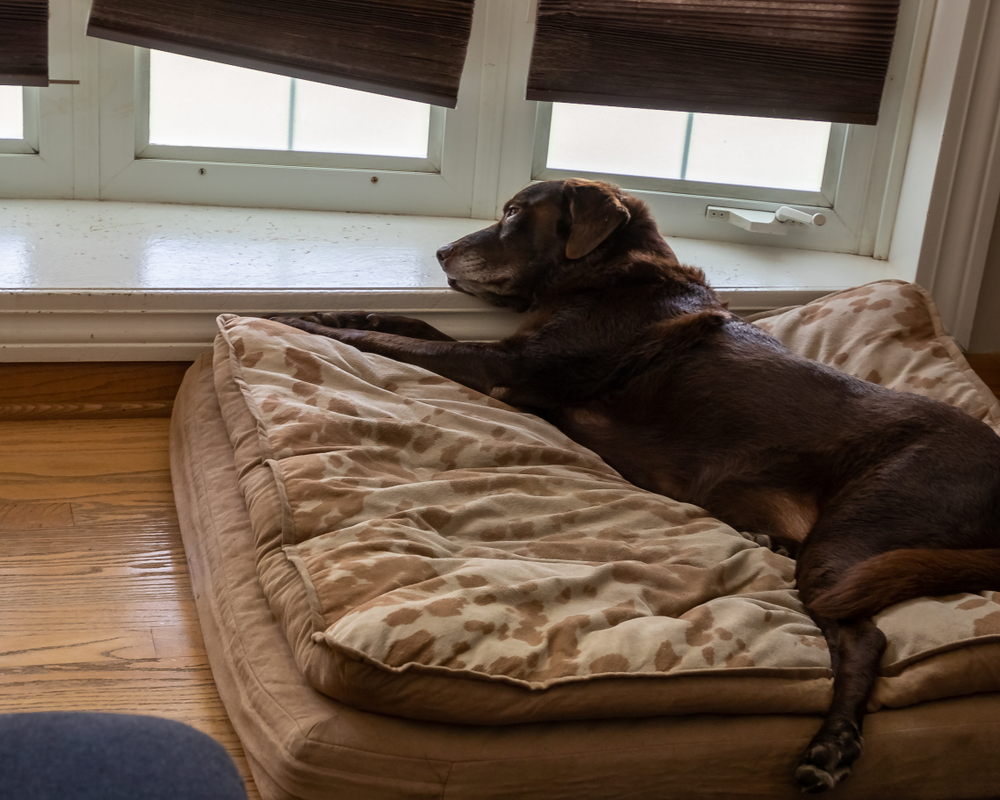 With his home adjustments and the prescription regimen, Leo was comfortable for several more months. But, then, he wouldn’t get up, didn’t want to eat, and barely wagged his tail. It was time. As Leo passed on, his family was comforted by the fact that they did everything they could to keep their aging four-legged friend happy and healthy for as long as possible.

Is your pet entering her golden years? Perhaps she’s slowing down, which may be due to more than simple aging. Schedule a senior wellness checkup to ensure your furry friend is healthy and the best plan is in place for her to age gracefully.

About the Author: Liberty Veterinary Hospital

We welcome you inside for your appointment – masks are no longer required. Curbside appointments are still available if preferred – just call us when you arrive (513)586-3736. Thank You!